You are here: Home / Engaged / Serving What People Can Eat 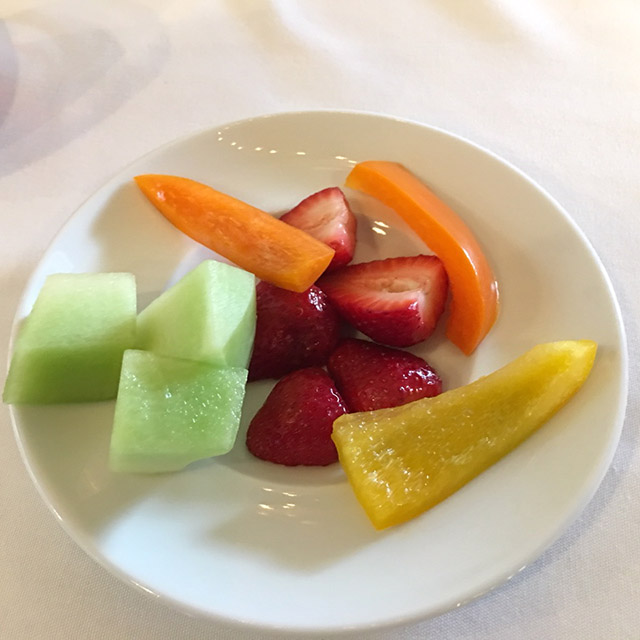 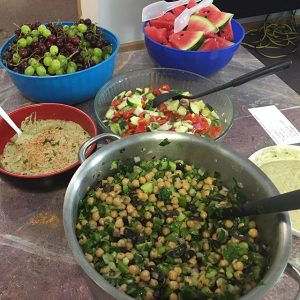 It’s hard to think about what other people can and will eat when planning an event. I fumbled the ladle a little this week when I made a crunchy Greek Chickpea Salad for people who are homeless or at risk of becoming homeless. Many of them didn’t even want to try the salad. I asked the director why afterward. She said, “It’s unfamiliar. And about eighty percent of our people are missing teeth.” Ouch!

Fortunately, other people had signed up to bring hummus, baba ganoush, and other soft foods. The tossed salad and watermelon were popular too. It wasn’t wrong to bring a crunchy salad because it provided variety for folks who could eat it. But I was glad that there were lots of other options for people who had trouble chewing.

Earlier today, I read two scenes in The Calculating Stars that brought this home. A family has taken in the heroine when she can’t go home. The first night, Elma declines the ham in a sandwich.

Mama said it was always better to get the conversation over with. “We’re Jewish.”

The next morning, Elma smells bacon frying and wonders if she’ll have to have the conversation at every meal. She opts for eggs and toast but realizes the eggs had been fried in bacon fat.

I felt something like her frustration at the Raleigh Environmental Awards recently. I’m on the Environmental Advisory Board but not on the planning committee for the awards. Still, they’d heard me talk many times about how eating plants is good for the environment. Just before I joined the board, I requested its support in making a change to Raleigh’s Comprehensive Plan to require serving plant-rich food at events and reducing food waste. Surely they’d at least have some hummus! 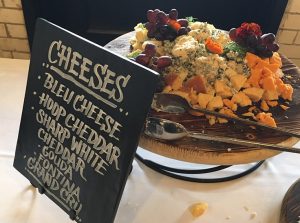 Nope. At the awards ceremony, the only ingredient labels were for a tower of cheese. I flagged down a server to ask her to find out from the chef if any of the dips or desserts were safe.  She broke the bad news as I was talking with a city councilor. His plate was full of baked filo-wrapped cheese, pimento-cheese crostini, yogurt dip, tiny fruit tarts, and a brownie. I wound up with plain, raw fruit and vegetables and water to drink.

According to the Environmental Working Group, cheese has more embedded greenhouse gases than pork. A green gathering should not feature a tower of cheese. Really, no event should. Many people avoid dairy for ethical, environmental, and religious reasons. According to Forbes, four percent of Americans 30 to 49 years old are vegan and eight percent are vegetarian. Many others are simply lactose intolerant. As the CDC reports:

The prevalence of lactose intolerance is lowest in populations with a long history of dependence on unfermented milk products as an important food source. For example, only about 5 percent of people of Northern European descent are lactose intolerant.

The beverages were wine, beer, and caffeinated iced tea. Many of the attendees were children, who probably should not drink caffeine, particularly after dinner. Some adults don’t drink for religious or health reasons. Some don’t want to drink and drive. The Methodist Church asks its members not to drink, so the award winners from the Highland United Methodist Church were drinking water or tea too. Offering lemonade, apple juice, sparkling cider, or herbal teas would have allowed more people to toast with a festive glass.

It could have been worse! At the Raleigh Citizens Advisory Council holiday dinner, I had raw vegetables and dry pita bread while everyone else had meatballs, cake, cheese cheese cheese, and more. I’ve been to many events where I don’t dare eat a bite, often because I don’t know what’s in the food being offered.

If you want to welcome people and have them come back, think about what they can and will eat. Offer options in textures, ingredients, and intoxicants. List the ingredients of dishes where it’s not obvious. That’s more helpful than categories such as vegan, vegetarian, and gluten-free because the definitions aren’t fixed or well known. See my tips on how to eat vegan and vegetarian if you want to check your understanding or get started. If you don’t know what to serve, check out my free recipes for inspiration. You can’t foresee every special diet, but you can try to include most people.