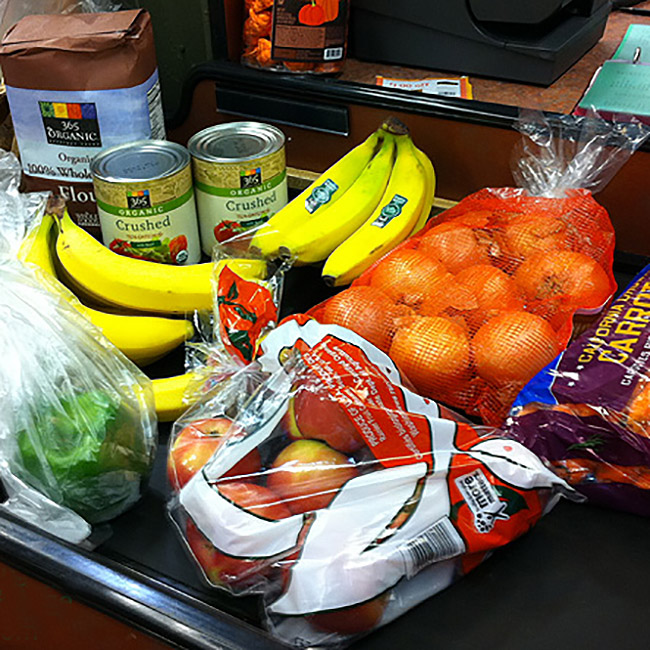 Home shoppers can learn much from the new report Many Miles to Go: Locally Grown Organics in North Carolina Supermarkets, even though it is aimed squarely at grocery executives. Do supermarkets agree on the meanings of “local” or “regional”? Which grocery chains truly support local food, which use greenwashing, and which frankly don’t care? What’s going on behind the scenes, from planning to supporting local farmers? Although the study took place in NC, many chains covered operate throughout the South East or nationally. The report by the non-profit watchdog Local Organic Y’All reveals that:

The food retailers themselves have a ways to go if they are to meet growing customer demand for organic and sustainably-grown food that is produced locally or even regionally. Today, with a few exceptions, company performance does not match the marketing.

Disclosure: I was on the volunteer advisory committee on this report.

Supermarkets could score up to 100 points, with 20 points each for:

Only Texas-based Whole Foods “passed,” earning 72 points for its long-term commitment to local food, strong in-store marketing, and wide variety of local, organic products. North Carolina chains did well, with Lowes Foods, Harris Teeter, and Food Lion tying for second for availability and labeling. (Note that Harris Teeter is owned by Kroger, but its corporate headquarters are still in Matthews, NC). Lowes was also second overall, with NC-based Ingles coming in third. Whole Foods and Earth Fare scored highest for animal products with 16 and 13 points. Target was at the bottom with zero points overall.

We were disappointed to find so little locally-grown organic items at our supermarkets, with the potential for so much organic food to be grown in the state and with so many stores touting their support of local. We saw California and Florida organic product on store shelves, even when those products were at their peak season in North Carolina.

How Can Supermarkets and the Local Food Movement Work Together?

I’m glad the report suggested actions from both sides to improve the availability of local organic food in grocery stores. Suggestions included:

For the food movement:

How Can You Make a Difference? Ask for and Buy Local and Organic.

Of course, supermarkets aren’t the only places to get food. Grow your own for the ultimate in local and affordable food. Buy directly from your local farmer at a farmers market or through a Community Supported Agriculture program. Join a food co-op for its local and organic food and for a chance to influence its relationship with local growers.

The Start of a National Movement?

Fred Broadwell told me that Local Organic Y’All would like to work with groups in other states that are interested in doing similar studies. If you know of any such groups, please consider letting know them about him and the Many Miles to Go report.

Maybe in the future we’ll have a Yelp-like app that will let us find the most plentiful and reliable sources of local and organic food wherever we go. Maybe because of groups like Local Organic Y’All, it will become normal to find organic local food wherever you shop. And that would be a good thing, y’all!