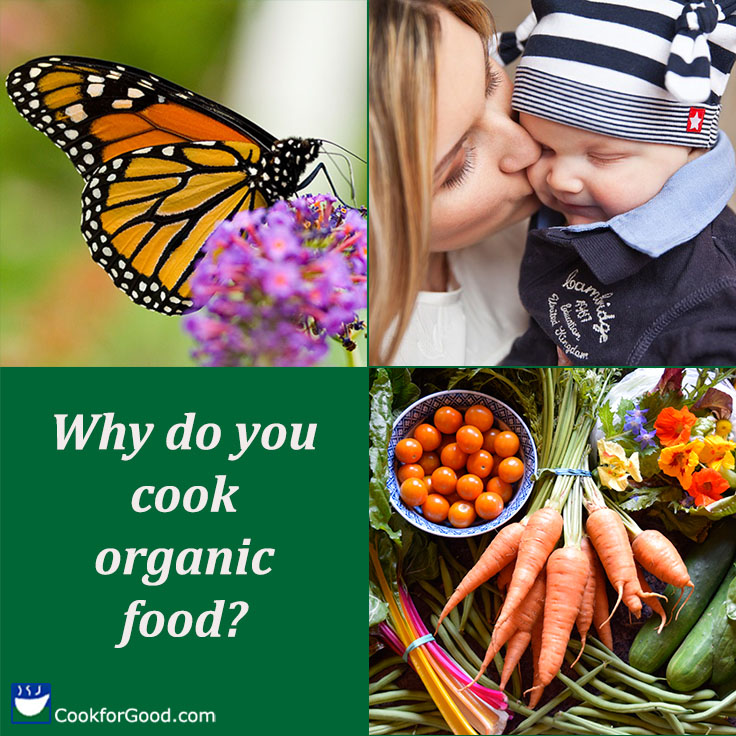 Why cook organic food? It’s better for your health and the health of the planet. This makes it a better value than “conventional” or industrial food, even though it often costs a little more. Fortunately, cooking at home is much cheaper than eating out, even if you cook with organic ingredients.

Eating organic is particularly important for children. It provides a dramatic and immediate protective effect against pesticides. The American Association of Pediatrics notes that diet is a primary source of pesticide exposure for many many children, saying in a position paper that:

Eating organic vegetables can lead to a safer, more comfortable pregnancy too. It reduces the risk of pre-eclampsia, an uncomfortable and sometimes dangerous condition. Even in 2012, when Big Food pulled out all the stops fighting the California organic-labeling law, here’s the best they could come up with (italics added):

Consumption of organic foods may reduce exposure to pesticide residues and antibiotic-resistant bacteria…. There isn’t much difference between organic and conventional foods, if you’re an adult and making a decision based solely on your health.

One of the first acts of Donald Trumps’ new EPA director was to deny a petition that called for banning the pesticide Chlorpyrifos for agricultural use, where it is sprayed on apples, oranges, broccoli, corn, almonds, soybeans, and other crops.  It’s been banned for household use since 2000. The Washington Post reports that Chlorpyrifos “belongs to the same chemical family as sarin nerve gas” and can have serious health consequences:

Epidemiological evidence suggests that Chlorpyrifos can cause brain damage to children and even to the unborn. A California study found that pregnant women who lived near fields where Chlorpyrifos was sprayed “were three times more likely to give birth to a child who would develop autism.”

With the government now openly siding with profits over people, buying organic food is a way to protect our families and the families of farm workers.

Organic food lets you avoid genetically modified organisms (GMOs), which unfortunately aren’t clearly labeled by themselves in the US. GMOs lead to more pesticide and herbicide use, which endangers our health, food security, and environment. Food security? Yes. Honeybees pollinate 70 of the 100 top food crops worldwide. Most neonicotinoid pesticides kill honeybees outright, while the herbicide glyphosate (Roundup) threatens hives by damaging the bees’ ability to communicate and remember.  GMOs also speed the development of superweeds and resistant pests.

Regenerative organic farming practices can store carbon and slow climate change, as the Rodale Institute shows on its research farm. For over 30 years, they’ve documented that organic techniques produce as much food as conventional techniques, with organic areas producing more during droughts.

If I were of child-rearing age now, or the parent of young children, I would make every effort to buy organic food.

Even though I don’t have kids, I’m happy to vote with my fork for a world in which children are born with fewer birth defects and are able to live up to their potentials, with high I.Q.s and fewer physical and behavioral problems. I want butterflies, bees, and other wildlife to thrive, too.