You are here: Home / Engaged / Finding Joy at the End of the World 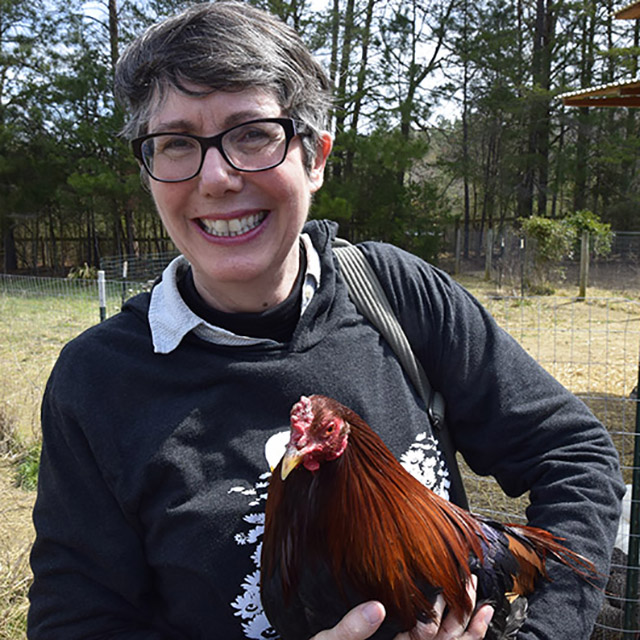 In my part of the Twitterverse, climate change is suddenly up close and personal. It’s time to make radical personal changes and to demonstrate the joy in them so others will join us. We are facing the end of the world as we know it.

Sam Pritchard’s bleakly funny imagined job interview captures the despair many of us feel when watching California and Greece burn.  Where does he see himself in ten years? Answer: We’re on track for four degrees of warming what the f**k are you talking about? 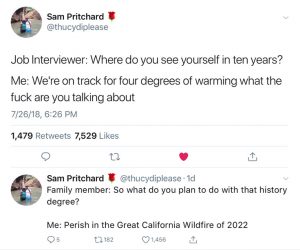 Climate change caused by human behavior is setting the world on fire and killing off large swaths of beings right now. The numbers can numb us as we read about the decimation of amphibians or coral reefs described by Elizabeth Kolbert in The Sixth Extinction. A particular case snaps the tragedy back in focus, like the orca mother currently carrying her dead baby off the coast of Victoria, BC.

We can’t do anything for the frogs or baby orcas that are already dead. But we can make a difference today that can prevent similar losses in the future. We may even be able to help Sam Pritchard thrive.

What are the Best Ways to Slow Climate Change?

A major study from Lund University found that the best ways to reduce our carbon footprints are:

The study also looked at moderate- and low-impact actions, such as washing clothes in cold water, line-drying clothes, recycling, and using a greener car.

I think we could also make a difference by buying less stuff, sharing or buying used when possible, and selling or donating what we don’t need.

Finding the Joy in Green Living 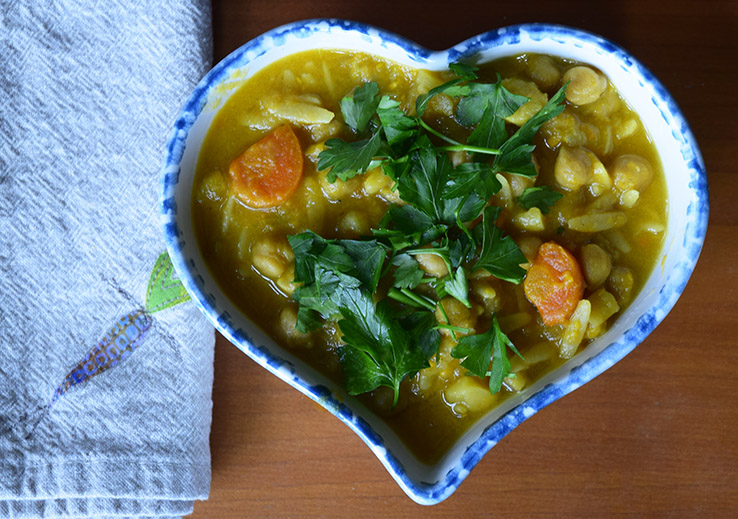 I hope my recipes and adventures in the kitchen show that eating a plant-based diet rocks. Eat fresh, healthy, delicious food and feel great. Get started by cooking a pot of beans or making vegan brownies. My four whole-day menus for under $7 show that you can save money too.

Add joy and shed carbon by shopping at a farmers’ market. I love seeing what’s freshly picked and in season, talking with my farmers and friends at the market, and sometimes hearing good musicians. Fresh local food didn’t log any air miles or long-distance trucking itself. It didn’t burn fuel during processing or long-term storage either.

This one is new and harder for me. When the Lund study came out, I was struck by the impact of a single transatlantic flight. Avoiding a trip from New York to London saves 1.7 ton of CO2 (or 1.6 metric tonnes). Longer flights burn more fuel, with London to Hong Kong taking 3.25 tons (2.96 tonnes). Of course, there’s nothing special about flying over water. This handy flight-emissions calculator shows that a round-trip flight from Raleigh to Los Angeles would burn about 1.3 tons of CO2. (Note that the calculator shows only a one-way trip, but since a US ton is 2000 pounds you can divide the result by 1000 to get the round-trip tonnage.)

Stop flying was my New Year’s Resolution, but then decided to see my hometown friends for the last time. I looked hard at train and bus options, but they were crazy-long and put the group trip at risk because of likely delays. I justified the flight by noting that my Taster and I had decided to celebrate our 30th anniversary at a music festival in Western North Carolina instead of flying to New Zealand. We heard top musicians from all over the country without having to leave the state. My round-trip flight to Lansing burned 0.3 tons, a savings of 6.1 tons compared to two people flying to the other side of the planet and back.

A key factor makes this easier for me. I’ve already been to many places on my bucket list, including London, Berlin, Prague, Vienna, Tokyo, Montreal, and most major US cities. I’ve hugged a redwood, hiked the red rocks of Utah, and climbed a pyramid in Chichen Itza. Do I need to go to London again? Or ever see Greece? No. By historic measures, I’ve already been tremendously lucky to travel so much.

Should you fly less or not at all?

That’s up to you. If you do fly, I hope you will take only trips that are necessary or that bring you to people you love. Maybe “necessary” for you is a once-in-a-lifetime trip to Europe and a Eurail pass. If so, enjoy and make the most of it.

On the other hand, I flew to Chicago last year for a conference that I later found out was live-streamed. Could have skipped it. I’ve been on many business trips that could have been handled with video streaming or email. If you groan about flying to your family reunion every single year, you have my permission to skip it.

If you are thinking about where to go to college or to get your next job, please consider options that put you close to people you can’t live without. Even if you don’t enroll in Hometown U, look for a choice that lets you drive or take the train home for the holidays.

Finding the Joy while Grounded 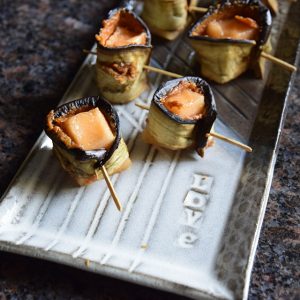 Instead of going elsewhere for excitement, I’ve been seeking out deep local experiences and enjoying the foreign qualities of near-by places. I took a pottery class from a Raleigh potter I admired and learned to make cool trays like the one you see above. I’ve gone to Indian and Chinese festivals, talked politics with people at their homes while doing voter outreach, and held a rooster at the Piedmont Farm Animal Sanctuary.

The money I’ve saved on tickets and hotel rooms will go towards tuning up our home in ways we will enjoy every day, including a tile backsplash for the kitchen and a window seat for the two kittens we hope to get next spring. I also joined the Rancho Gordo Bean Club. This quarter, I’ll feast on Azufrado beans that Steve Sando brought back from Nayarit, Mexico as a souvenir and then grew to share. He wrote in the Bean Club Newsletter:

A decal shot glass is fine but I’d rather remember a good trip with something that tastes great.

I’m hoping to have memories of grand bean-centric dinner parties and let Steve do the traveling for me.

I’m half-way there on this one. I haven’t had a car since my truck accident in 2015, but my Taster lets me use his car when I want to. Most days it stays in the driveway. If we ever replace the Subaru, we’ll get an electric car. We hope to hold out for driver-free ride services.

I walk or carpool when I can. When I do drive, I try to combine trips. In the fall and spring, I sometimes take the Raleigh bus but should take it more. We take the train when we go to Washington DC.

I don’t have any children and never wanted any, so this step couldn’t be more natural for me. Children should be born into loving families or find those families as soon as possible. We can do a great deal of environmental good by making it easy for people to have children only when and if they want them. Everyone should have access to free sex education and family planning services.

Where’s the joy in this? Research shows that in the US and many other countries, not having children makes you happier:

On average, an American parent reports being 12 percent unhappier than a non-parent in America – the biggest gap in the 22 countries the researchers looked at, followed distantly by Ireland. In 12 other countries, non-parents also described themselves as happier than parents. However, in eight countries – Portugal, Hungary, Spain, Norway, Sweden, Finland, France and Russia – parents actually reported being happier than non-parents.

Another study found that older fathers may be happier, but not mothers or younger parents:

Of the three studies, the largest sample comes from 6,906 individuals collected between 1982 and 1999. It found that fathers and parents between ages 26 and 62 were happier, but not mothers, young parents and single parents. There were no differences in happiness between moms and women without children, but young parents and single parents were significantly less happy than childless peers.

I sometimes think about the path to motherhood that I didn’t take when I see my friends and their amazing children. It’s clear that parenthood can bring amazing joy and bonding.

But parenthood is not for everyone. More kids may not be better. Let’s stop pressuring people to have babies. Let’s quit trashing the planet so the babies that are born have a beautiful world to enjoy.

How has Climate Change Affected You? What Steps are You Taking to Slow It?