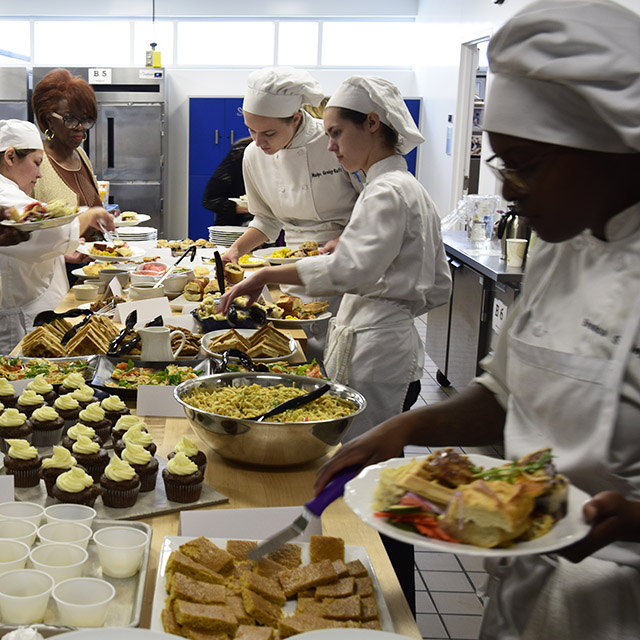 Recently, I enjoyed lunch prepared by Culinary Arts students in Heather Therien’s nutrition class at Wake Tech in Raleigh. They showed what they’d learned about making food for people with special dietary needs, including vegans and those who avoid gluten. That’s Heather below in the white toque, with Baking Associate Department Head Caralyn House. Enjoy the lunch pictures and read on to see why Wake Tech is such a great bargain for culinary training.

The class served quite a spread, with labels to help us know what we were eating. It’s good business for modern culinary professionals to know how to cook plant-based food. Vegans made up 6% of the US population in 2017. Between 2006 and 2016, veganism went up 350% in the UK, a trend driven by people in their teens and twenties. Many others are eating less meat or only eat meat at home, where they can choose meat that is organic or from small farms with pastures. Even omnivores often want vegan dishes on the menu so their vegan friends, co-workers, and family can get something to eat. I’ve steered a lot of business lunches to vegan-friendly places. 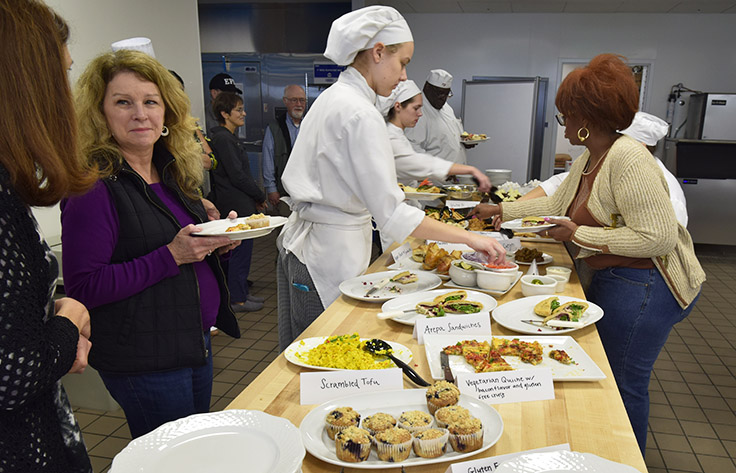 The lunch included creamy mayonnaise with aquafaba (chickpea broth) instead of eggs. I spread the mayo on a freshly baked, crisp roll and topped it with marinated seitan and colorful veggies for a vegan bahn mi. It’s the first one I’ve had since my favorite Vietnamese sub shop closed. (I used to bring my own Just Mayo for a tofu bahn mi.)  Yum oh yum! 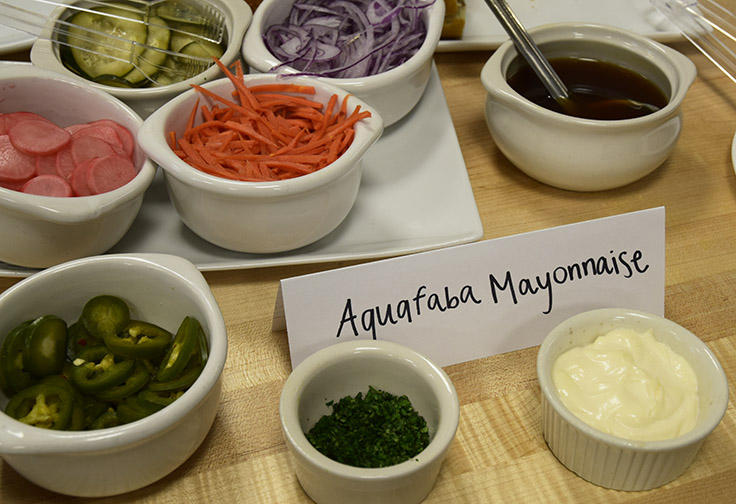 They even had a vegan version of a local classic: chicken and waffles with maple syrup. 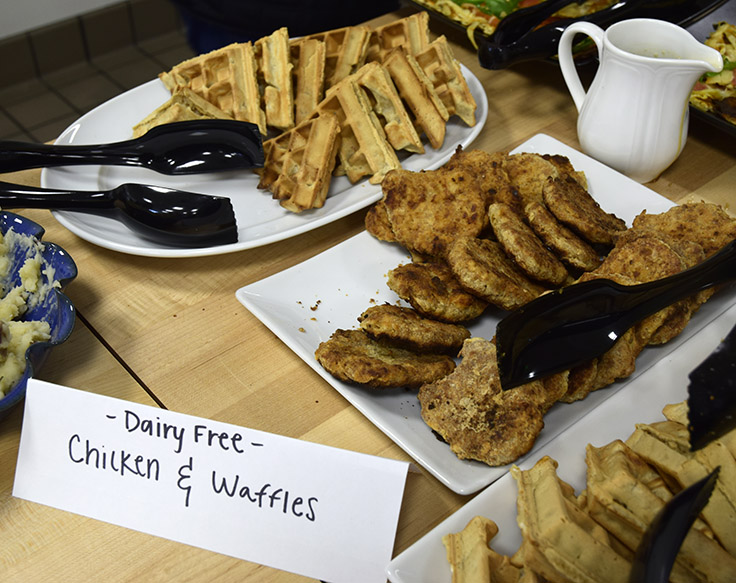 I don’t know what happened to my photos of the desserts, but we enjoyed a tropical, refreshing mango ice cream made with a soy base, artfully piped aquafaba meringues, and an olive-oil cake so good I went back for seconds. See other Wake Tech dessert pictures below.

The Culinary Arts at Wake Tech is a Bargain

You can learn to be a chef, sous chef, baker, or food-service manager through the Culinary Arts program without dishing up student debt. Food writer Andrea Weigl says some of the best advice she ever got was to go to Wake Tech to learn food lingo and core cooking skills. She’s now an associate producer for the award-winning TV show A Chef’s Life.

Tuition and fees come to just over $3,000 a semester for an in-state student. The student-teacher ratio is 12 to 1. For comparison, tuition at Johnson & Wales in Charlotte costs $32,091 a year and the student-teacher ratio is 27 to 1. Wake Tech understands the need for flexibility, offering classes during the day and in the evening. You can also start the program any semester. Students work in a new building with state-of-the-art cooking and baking facilities.

I’ve enjoyed several Culinary Arts lunches, tastings, and shows. The students and faculty prepare delectable food and present it with professional flair. I found this tangy vegan sourdough roll at a Wake Tech Culinary Arts show a few years ago. 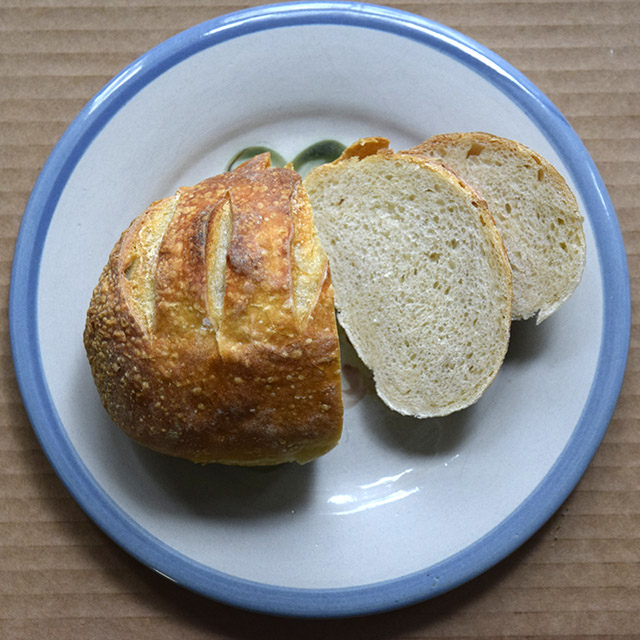 Baking and pastry students create amazing cakes for weddings and other special occasions. Look at those hand-made flowers! 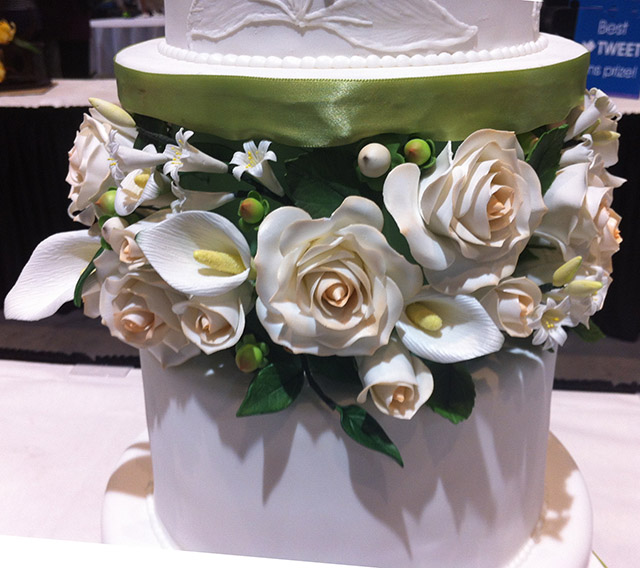 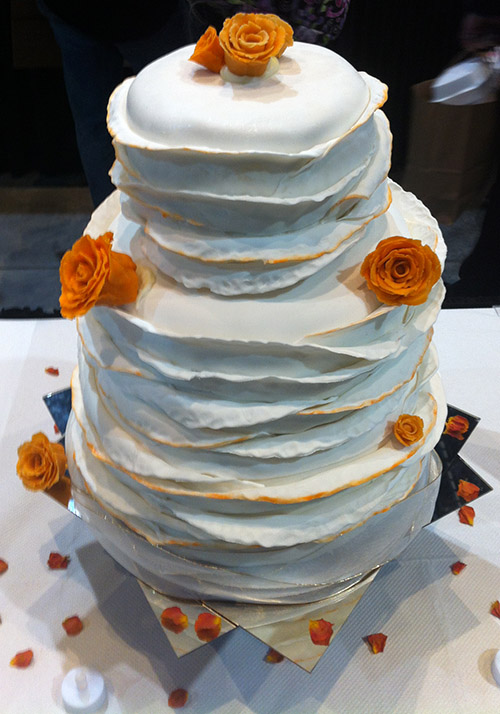 To see more of the art that goes into these cakes, watch this video about a Wake Tech Culinary Showcase.