You are here: Home / Feel Great / Get Healthy / How much protein is enough? What are the best sources? 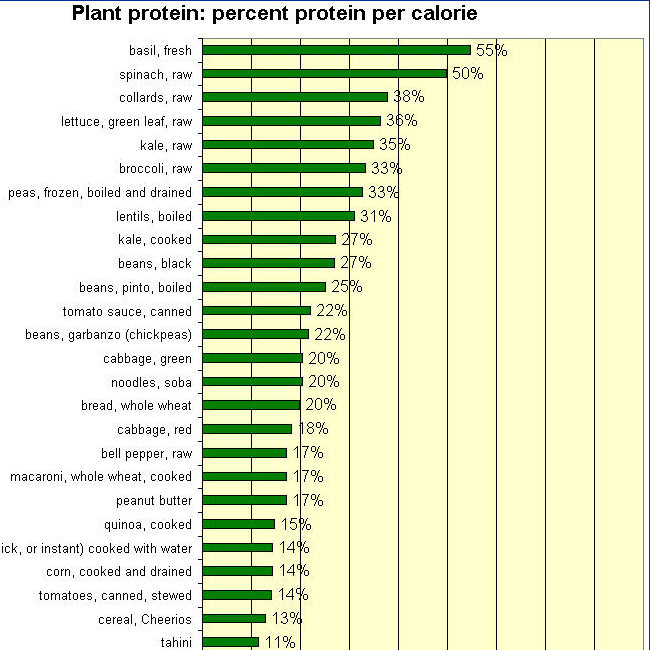 A major study in the journal Cell Metabolism links high consumption of protein to a 75% higher death rate. It says that people 50 to 65 years old who eat a high level of protein (20% or more of calories) compared to those who eat a low level (9% or less) are:

The increased risks of disease and death from eating high levels of protein are even more startling when you realize that the risks are higher for those who eat a lot of protein from animals. The study says:

However, when the percent calories from animal protein was controlled for, the association between total protein and all-cause or cancer mortality was eliminated or significantly reduced, respectively, suggesting animal proteins are responsible for a significant portion of these relationships. When we controlled for the effect of plant-based protein, there was no change in the association between protein intake and mortality, indicating that high levels of animal proteins promote mortality and not that plant-based proteins have a protective effect.

How much protein should you eat?

The researchers recommend that the Food and Nutrition Board of the Institute of Medicine change its current recommended protein intake to its current minimum. That puts it right in line with The China Study and the menus and recipes here at Cook for Good. The board’s current recommendation is 1.0–1.3  grams of proteins per kilogram of body weight per day, with a minimum intake of 0.7 to 0.8 grams per day. For someone who weights 100 pounds, that would be a drop from a range of 45 to 59 grams of protein a day to a ranger of 32 to 36 grams. That is the amount of protein in a cup of shelled walnuts, a half cup of raw spinach, or a half ounce of cooked salmon.

Plants can provide plenty of protein, often more than meat per calorie

If you’ve become used to the restaurant slang that uses “protein” to mean “beef, pork, chicken, or fish,” take a look at the two charts below. The first shows top plant sources of protein. Cook for Good supporting members can log in to find a chart with the protein in 38 vegetables, fruits, grains, and nuts in the Supporters’ Recipe Library). The second chart shows common animal sources of protein. Notice that basil has more protein per calorie than pork chops, raw spinach has more than salmon, and red cabbage has the same amount as pepperoni–all at a fraction of the cost. 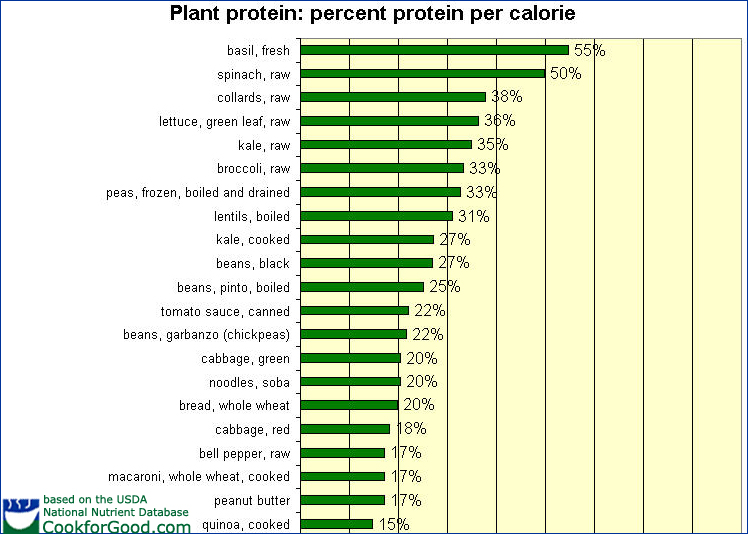 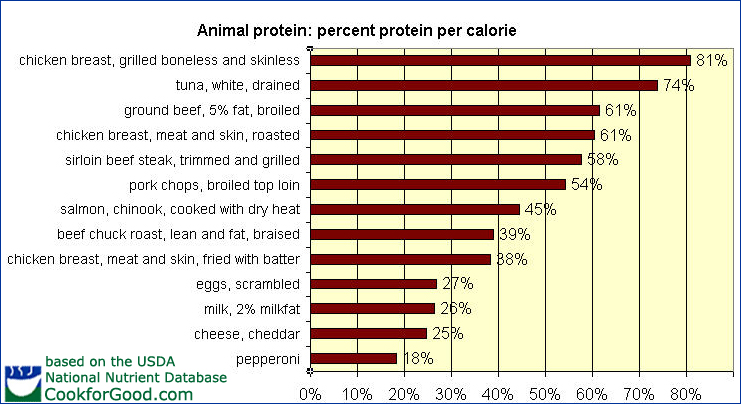 Key findings about the risks of eating too much protein

How reliable is the study?

Does this study have critics?

Of course it does. Real money is at stake. But one worth considering is Marion Nestle, the respected and oft-quoted nutrion expert, who told the Washington Post that the study doesn’t take into account lifestyle choices and that more research is needed. The Post quotes her as saying:

I’m also puzzled by the idea that there is a significant difference between the effects of protein from animal and vegetable sources. Protein is not, and never has been, an issue in American diets, and the data presented in this study do not convince me to think otherwise.

I would wonder more why Dr. Nestle doesn’t seem follow the study’s sections on the growth hormone IGF1, but I was at the International Association of Culinary Professionals panel session during which she said she doesn’t use any research from vegetarians or from industry groups. At the same conference, Dr. Neal Barnard told me, “Every sensible researcher is sooner or later probably going to become vegan.” I agree with Dr. Nestle that more research is needed, as it always is in science. I’d love to see major government funding for studies that explore the possibility that we can reduce suffering and delay death by eating a low protein, plant-based diet.

You can put a balanced diet into your health playbook today, along with getting plenty of exercise, flossing your teeth, not smoking, and wearing seat belts. It’s easy, delicious, and thrifty. I changed to eating only plants in early December 2011. In a week, I could breath better, climbing hills that had made me pause for breath before. Within two months, my arthritis disappeared. I haven’t had a single migraine and I’ve lost over 20 pounds. Hallelujah and pass the spinach!