You are here: Home / Save money / What Does a Slice of Pie Cost? 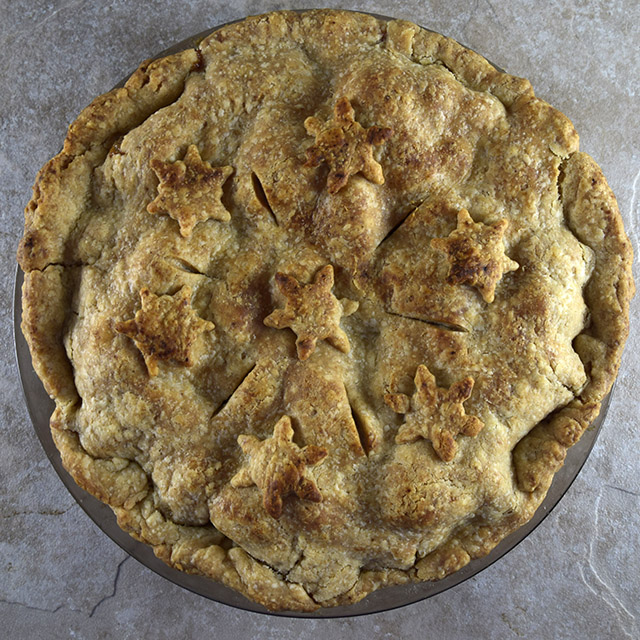 How much are you paying for pie? That depends on how many slices you cut. (See the chart below.) Yesterday I noticed that my Sneaky Wheat Pie Crust recipe and the recipes in Wildly Affordable Organic say twelve, this week’s Blueberry Pie recipe serves eight, and my Apple Pie used to feed just six — all using the same nine-inch pie plate!

Yikes! When I realized that, I changed the recipes for the crust and apple pie so they both serve eight and adjusted the cost and nutrition. I also swapped the Earth Balance Buttery Sticks for organic Miyoko’s Vegan Butter, which wasn’t available in my area when I first wrote the recipe for pie crust.

Here’s a chart showing the change in costs depending on the number of slices and whether you use Miyoko’s Vegan Butter or Earth Balance Buttery Sticks. The cost of the fruit can vary widely too, from nearly free if you grow your own to big-city prices for local organic fruit.

How Many Slices Should Be in Your Pie?

It depends. Cut enough to serve everyone who wants a slice. Make them small enough to fit your diet, budget, and desire not to waste food. Make them large enough so people feel like they’ve had some pie. Smaller pieces work best if some people might have seconds or more than one type of dessert, say at a pot luck or picnic.

If $2.30 for a piece of organic homemade pie seems too much, consider that one of my favorite local restaurants serves pie made with conventional ingredients for $8 a slice. That’s $64 to $96 for the whole pie, not including tip and sales tax. Cooking at home is wildly affordable, even with the best ingredients.