You are here: Home / Library / Never Out of Season 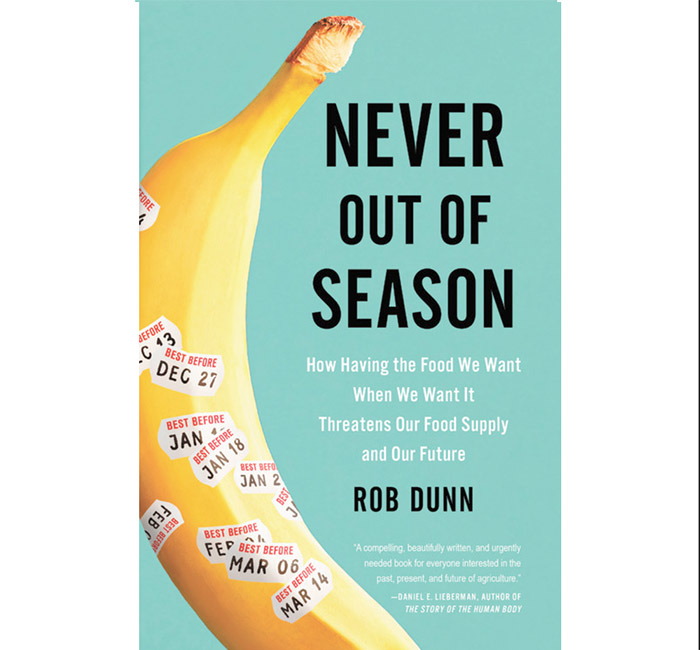 Never Out of Season opened my eyes to a whole new reason that organic and sustainable agriculture is essential: it will help save us from famine. This riveting story of agricultural disasters and heroics convinced me that the Irish potato famine was not just tragic history but the first truly modern food disaster. Author and NCSU Professor of Applied Ecology Rob Dunn writes:

Perhaps the hardest thing to conceive of is that the demon that stalked the Irish fields could afflict us today. Like that of the nineteenth-century Irish, our diets have become ever simpler and more dependent on a small number of species. Today, just as in the 1800s of Ireland, this dependence results in part from our need and in part from our choices. We need ever more food from each acre and so are bound to those crops that produce the most. Just as it was for the Irish, each time a child is born our reliance on our most productive crops increases. Corn in North America. Wheat in Europe. Cassava in Africa. Rice in Asia.

Big Ag relies on monocultures propped up by fertilizers, pesticides, herbicides, and irrigation. They rely too on a very few varieties of plants, often identical ones produced through genetic engineering. Local varieties that can resist drought, pests, or disease are no longer grown. These varieties represent centuries of breeding for productivity in local conditions without expensive and unsustainable inputs. They are often the tastiest varieties too, selected before anyone thought of shipping melons from California to North Carolina. We can help protect unusual varieties by buying them and by planting them in our own gardens.

If the risk of famine isn’t enough to make you spring into action, how about war? Dunn shows how the persistent drought and related food issues led to political upheaval in Iraq and Syria. I learned Syria used to be stable, with education and affluence levels higher than they are now in North Carolina. Yet Syria now makes the news for its refugees. Dunn writes about the Middle East:

In light of the predictions of long-term regional drought …, finding and saving all the crop varieties and wild relatives of crops able to deal with dry conditions, and breeding those crops to deal both with drought and heat, is key to the survival of hundreds of millions of people in the future. It is key, too to the political stability of the region. Governments fall when their food supply collapses.

There is enough swashbuckling adventure in Never Out of Season for at least three action movies.  I gobbled up chapters on chocolate terrorism, Henry Ford’s rubber folly in South America, and how wasps saved cassavas in Africa and thus saved millions of people. I even have a new set of heroes: Nikolai Vavilov, who created the world’s first large seed bank, and the starving workers who protected it during the Siege of Leningrad.

The final chapters bring us right up to the present, including an invitation to become a citizen scientist, studying crop plants grown in your own garden and reporting about their pollinators and pests. It’s an exciting call to action, giving us a way to open up knowledge that is increasingly locked behind the doors and non-disclosure agreements of Big Ag. Dunn shows many cases where open, well-organized communication could have avoided mass starvation and the risks we are taking now by not supporting it.

I’m looking forward to an exciting discussion when my book club reads in next spring. I hope Never Out of Season gets the readership and has the impact of Silent Spring. Rob Dunn’s book will make you see the world in a new way. It may even save your life.